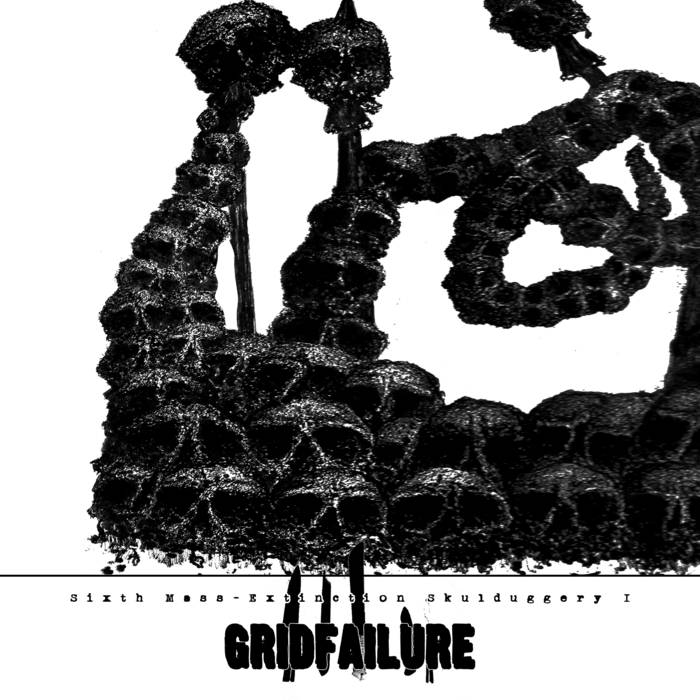 New York hostile alchemist GRIDFAILURE will launch the extensive Sixth Mass-Extinction Skulduggery concept album series in February -- the month GRIDFAILURE marks its third year of inception – by releasing the first of five albums, all of which are in their final stages.

GRIDFAILURE’s concept sequence, Sixth Mass-Extinction Skulduggery, is a series of albums which predict a grim, rapidly-approaching reality. The series’ five titles culminate tales of nature’s decimating wrath in response to humanity’s provocation, and the effects on our civilization. The series will include Sixth Mass-Extinction Skulduggery I, II, and III, and will culminate with the two massive albums Teeth Collection and Drought Stick, which document random stories from the final days of the human species.

As resources are depleted, so are morals, and as monolithic storms ravage the planet, neighbors turn on one another, and once war and uprising decimate the population, survivors are left to slaughter for survival in a diseased and polluted wasteland aftermath. Sources of uncontaminated energy, food, and water are scarce on the grim sphere, and the species’ reliance on technology has left most humans helpless to do anything but wait to be pillaged and consumed by marauding outlander factions or simply perish in the unforgiving climate. Themes of cannibalism, disease, delirium, revenge, scourge, warfare, and general underhandedness are written from haphazard points of view within the withering human race in the multi-release series, which infuse heavy elements of tribal/and percussion with post-industrial and mechanical beats resembling a biomechanical hybrid, deploying a communal aura of woe and rage.

Sixth Mass-Extinction Skulduggery I delivers over fifty-two minutes of GRIDFAILURE’s paranoia-induced powerdementia. The album was entirely conceived, written, executed, recorded, mixed, and completed with hand drawn art by GRIDFAILURE’s architect David Brenner who plays vocals, electric and acoustic guitars, bass, electric, analog, and acoustic drums, keys, synth, harmonica, violin, theremin, field recordings, and more. Many elements of the record were written in times of blackout - including lyrics and themes written during a long blackout during Superstorm Sandy before GRIDFAILURE’s inception – and elements recorded during open air sessions during extreme storms including outdoors, and more, helping embody the outfit’s moniker itself.